Our mood can be affected by a wide variety of factors – poor sleep, unhealthy diet, external stressors and past traumas can all play a role in dragging our mood down, making it difficult to pinpoint the exact cause of low mood and even more tricky to find a solution. However, many experts do seem to agree that our neurotransmitters are likely involved.

Neurotransmitters such as serotonin and norepinephrine help to relay important messages to our brain and also, to an extent, regulate our mood. Everyone is different so, naturally, our levels of these neurotransmitters will vary and it’s this variation that experts believe could be connected with low mood, although it’s still difficult to prove.

What does St John’s Wort do?

St John’s Wort is a bright yellow flowering herb that grows best in the sunny slopes of Europe, getting its name from the time of year that it blooms, the summer solstice or ‘St John’s Tide.’ It’s been used in herbal remedies for centuries, sometimes to treat hot flushes or accelerate wound healing, but more recently it’s gained a reputation for helping to alleviate the symptoms of low mood and anxiety.

Of the numerous different species, the one that has been studied the most, Hypericum perforatum, is more widely used in medicine. It’s believed that a specific compound found in this plant, hyperforin, could help to prevent damage to the neurotransmitters that help to regulate our mood, namely serotonin and norepinephrine.

It does this by inhibiting the action of monoamine oxidase enzymes. These enzymes degrade important neurotransmitters which can impact your mood. Once this degradation is prevented, it naturally increases your levels of serotonin and norepinephrine, improving your mood and reducing symptoms such as low mood and anxiety.

What does the research say?

Okay, this is the action that St John’s Wort is meant to exact on your nervous system, but what does the research say? Can these claims actually be backed up by science? Well, the answer is yes, absolutely! Numerous studies have been carried out on the impact of St John’s Wort and many have produced positive, promising results. One of the more well-known pieces of research surrounding St John’s Wort comes from a systematic review of double-blind randomised controlled trials.1

This research looked at an enormous number of controlled studies revolving around St John’s Wort and its effect on depressive symptoms. These studies involved trials that pitched St John’s Wort against both placebos and antidepressants and found that, of those participating in the trials, volunteers who  had taken St John’s Wort were 28% times more likely to respond to treatment compared to the placebo group.

This might have been expected but, what wasn’t expected was that there was little difference between the efficacy of St John’s Wort and antidepressants. In fact, researchers involved with the project claimed that St John’s Wort could be just as effective, but it’s important to note that these trials only looked at patients with mild or moderate depression and excluded those with more severe forms of the illness. It should also be noted that those from German-speaking countries seemed to yield the best results but the reason behind this isn’t clear.

Are there any drawbacks?

I think the main thing to take away from this study is that there is evidence to support the idea of St John’s Wort having some action against low mood and anxiety but, when it comes to major forms of depression or depressive symptoms, a doctor or practitioner should always be consulted before using the remedy.

As you can see, this is quite an extensive list so it’s definitely worth investigating this remedy first before immediately diving in.

Why our St John’s Wort Hyperiforce? 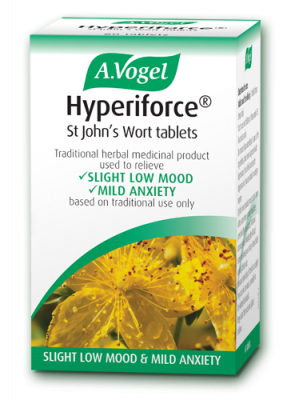 licensed St John’s Wort Hyperiforce that has gone down really well with our customers. The St John’s Wort contained in this product is organically grown in Switzerland and is only used after it’s been freshly harvested.

Unlike many stress and low mood remedies, Hyperiforce doesn’t have any sedative qualities – no drowsy side-effects here thank you! Just one tablet, three times daily is all that’s required to give you the dose you need, so it’s efficient and very convenient. Don’t take our word for it though – just see what our customers have to say!

What do customers think?

“Helps me when I am low, makes my life smoother and more balanced.”

My son is sleeping better and gets less anxious.”

“This is the best quality St John's Wort I have ever tried.”