Fairtrade Fortnight has just finished in Greenlife, and this year was a resounding success both in terms of sales of Fairtrade product and of raising awareness of this year’s campaign. The National campaign was entitled ‘She Deserves More’ and focussed on the plight of Cocoa farmers, many of whom are women. 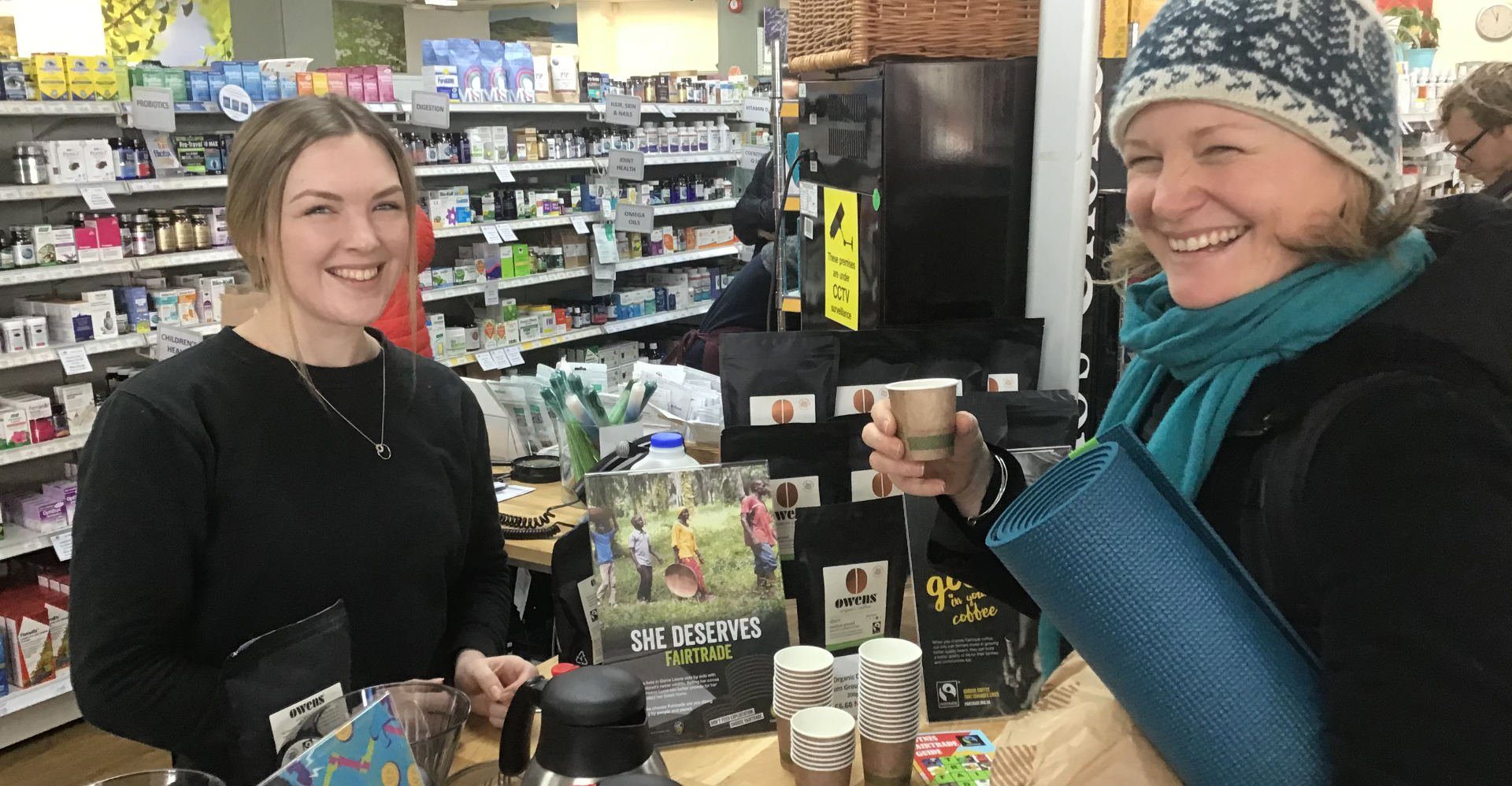 Fairtrade Fortnight has just finished in Greenlife, and this year was a resounding success both in terms of sales of Fairtrade product and of raising awareness of this year’s campaign. The National campaign was entitled ‘She Deserves More’ and focussed on the plight of Cocoa farmers, many of whom are women.

We always make as much effort as we can to support Fairtrade Fortnight in Greenlife, which is why we have been awarded no less than six South West Fairtrade Business Awards. The two weeks, which ran from 24th February – 8th March this year, got off to a good start when Greenlife was featured on ITV West in a news item about the campaign, and throughout the two weeks we had a range of promotions on Fairtrade products, product tastings and demo’s in store. These included Fairtrade chocolate brands Chocolate & Love and Green & Blacks, Tropical Wholefoods and Owen’s Coffee (pictured).

The Fairtrade Foundation enables farmers and producers of some of our favourite foods to enjoy a safety net through the Fairtrade Premium and the Fairtrade Minimum Price that protects them from low prices for their crops.

Although the global chocolate industry is worth billions of pounds, currently cocoa farmers gain very little from a very profitable global cocoa trade. With Fairtrade sales, farmer cooperatives receive the Fairtrade Premium which they can spend on improving quality and productivity of their farms, to increase incomes.

Ninety per cent of the world’s cocoa is grown on small family farms by about 6 million farmers who earn their living from growing and selling cocoa beans. Ghana and Côte d’Ivoire (Ivory Coast) are the top selling countries, with Côte d’Ivoire supplying 40% of the global trade.

The Fairtrade Premium is a sum of money given to producers  directly from the Fairtrade Foundation. Farmers and workers choose how they spend the Premium, which they can use to make their farms and communities stronger. It also allows them to invest in different ways of making money, so that they are less reliant on the unpredictable cocoa market.

Women’s empowerment: Fairtrade is also supporting more women cocoa farmers to take the reins and stand tall alongside men. Fairtrade Standards make sure that they have a voice in their community, are represented in decision-making and benefit from Fairtrade. The Fairtrade Foundation knows that independent income in the hands of women brings positive change to communities even faster.

Environment: While you can’t protect the planet without protecting its people first, rigorous Fairtrade Standards support farmers to protect the environment and the Fairtrade Premium is enabling them to invest in climate resilience and adaptation.

Fairtrade chocolate currently accounts for 12% of total sales in the UK, and when you choose Fairtrade you are making a real difference to real lives.