The list of Hayfever symptoms is a long one - sneezing and coughing, a runny or blocked nose, itchy, red or watery eyes, itchy throat, mouth, nose and ears, loss of smell, pain around your temples and forehead, headaches, earache and feeling tired may all be symptoms of Seasonal Allergic Rhinitis. So what can you do? 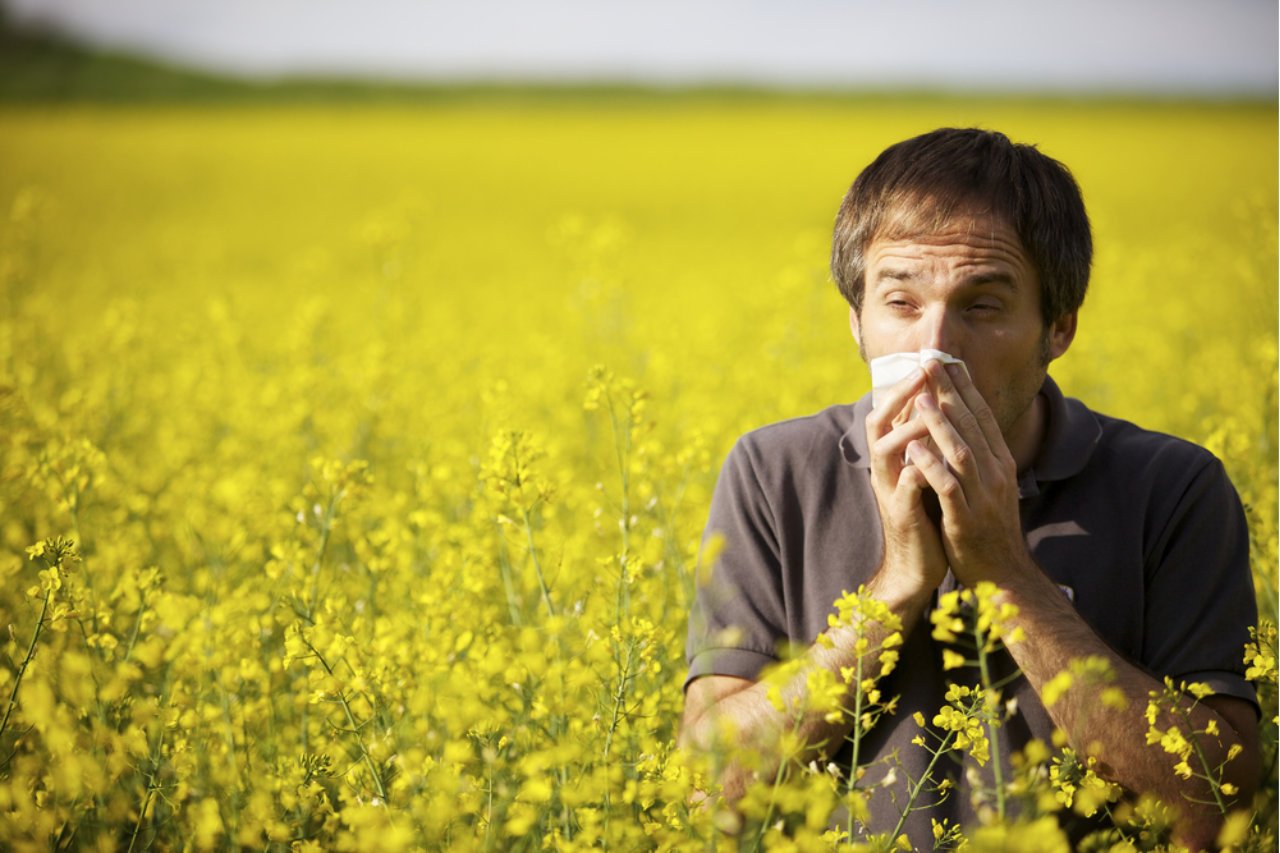 Hayfever, also known as Seasonal Allergic Rhinitis, is now estimated to affect one in four people in the UK (1) and between late March and September, it can make life miserable for people who are unfortunate enough to suffer from it. The Hayfever ‘season’ is a long one. Tree pollens are released between March and April, grass pollens are released between May and July, and Weed pollen is released between June and August, but many sufferers are allergic to more than one type of pollen, so they may face months of misery. The most common trigger for this common form of allergic reaction is grass pollen. Approximately nine out of ten Hayfever sufferers are allergic to grass pollen which reaches its peak levels in June and July, but some individuals are allergic to both tree and grass pollen and will therefore have symptoms that last for several months of the year. Although often forgotten, Hayfever can also be caused by mould spores which are released later in the year – throughout September and October. The list of Hayfever symptoms is a long one – sneezing and coughing, a runny or blocked nose, itchy, red or watery eyes, itchy throat, mouth, nose and ears, loss of smell, pain around your temples and forehead, headaches, earache and feeling tired may all be symptoms of Seasonal Allergic Rhinitis. So what can you do?

Many of the worst symptoms of Hayfever, such as runny eyes and nose, sneezing and rashes are caused by elevated levels of histamine in your body, which are produced as your body reacts to various pollen particles in the air. Histamine is an organic compound that is produced by the body and is involved in various body processes. It triggers an inflammatory response as part of your immune system’s response to anything it perceives as an unwanted invader, these include bacteria and viruses but may also include pollens too. Irritation seems to be increased in areas where there is high pollution, and people who live in cities often suffer as much as those of us who live in the countryside. This may be because pollens bind to the pollutants in the air, such as those produced by car fumes, and these larger particles cause more irritation to your bronchial passages and lungs, and to your skin. This may also be why elevated pollen levels can frequently cause asthmatic reactions to be more extreme too. Both caffeine and alcohol can encourage the production and release of histamine, and consumption of dairy products can increase mucous production which will only make symptoms worse, so while pollen levels are high it is worth keeping down your intake of all of these. It is also worth keeping your intake of refined sugar to a minimum too because this is linked to dramatic ups and downs in blood sugar levels, which in turn can cause an adrenalin surge that activates histamine. In addition to these dietary changes, take care to dry clothes indoors so that they don’t collect pollen, and close windows and doors if you can, especially late in the day. In Spring and Summer, pollen counts are highest in the early evening, as pollen that has been released all day and has drifted up into the higher atmosphere all comes down as the air cools – which is why your early evening barbeque can be a nightmare – especially if you are enjoying a histamine boosting beer (Sorry for that bit of bad news).

Obviously staying indoors avoids contact with troublesome pollen, but it’s not really much fun to miss out on outdoor life in the Spring and Summer. Checking the met office or other news sources for the pollen count can help you to weigh up the probable likelihood of you having a bad time of it on any given day, but it is well worth remembering that getting out earlier in the day is generally going to be easier. There are a few valuable tips for coping better outside. If you do have to go out, wear wraparound sunglasses to stop pollen getting in your eyes, and shower and change your clothes when you come in, to avoid dropping pollen all over your house. If you are out all day, and come home late, it is best not to undress in the bedroom, as any pollen that has collected on your clothes will end up in the air where you can breathe it in, antagonizing your Hayfever just as you are going to bed. Regular vacuuming or dusting with a damp cloth can keep pollen levels down in your house, too. As well as lifestyle changes that may minimise your exposure to pollen – but as well as these lifestyle measures, there are quite a few natural remedies that may provide further protection or symptomatic relief.


There are many homeopathic remedies available for Hayfever, some of which are extremely popular, and which may contain homeopathic potencies of various herbs or pollens. A.Vogel’s Pollinosan is a homeopathically prepared herbal remedy that combines several different herbs that have been potentised using a traditional homeopathic method to relieve the symptoms of hayfever and other forms of allergic rhinitis, the primary one being Luffa. Pollinosan Hayfever tablets are made to an original Alfred Vogel formula. Luffa is swift to work and can much reduce symptoms such as a blocked or runny nose, watery or itchy eyes and a tickly throat. In addition to the tablets you can also use the Pollinosan Luffa Nasal Spray to clear the nose of pollen, and to restore fluid and moisture levels in your nose, making it feel more comfortable. Simply spray it once or twice in each nostril when required, up to five times per day.

Quercetin is a bioflavonoid that is found in many fruits, vegetables, leaves and grains. Quercetin has anti-histamine and anti-inflammatory properties that make it very useful for reducing Hayfever symptoms (2,3,4). Interestingly, onions are a rich source of Quercetin, which is why onions are often cited as a traditional remedy for Hayfever. Quercetin inhibits the production and release of histamine and other pro-inflammatory substances in the body. The release of histamine and other inflammatory mediators from mast cells and white blood cells is directly involved in causing acute allergic and inflammatory responses. Mast cells are found in the highest concentrations in the blood vessels of the respiratory tract, the lining of the eyes, the gastrointestinal tract, and the skin, which is why these are where we get so many allergic symptoms manifesting themselves. Viridian Quercetin B5 Plus Complex contains Quercetin plus several other helpful nutrients. Vitamin B5 (also called Calcium Pantothonate or Pantothenic acid) supports adrenal function. The adrenal glands are involved in the release of cortisone, an anti-inflammatory hormone that is used by the body to dampen down allergic reactions. The formula also contains Nettle and Vitamin C (see below), Pine Bark (believed to reduce histamine production by reducing the antibodies in your blood that trigger it) and Bromelain. Bromelain is an enzyme that is naturally found in the stems of pineapples and has been found to exert anti-inflammatory effects that may be helpful to people suffering from Hayfever, making breathing easier and suppressing coughing. Higher Nature Quercetin & Bromelain is another good choice of Quercetin supplement – containing high doses plus a small amount of Bromelain and Vitamin C. 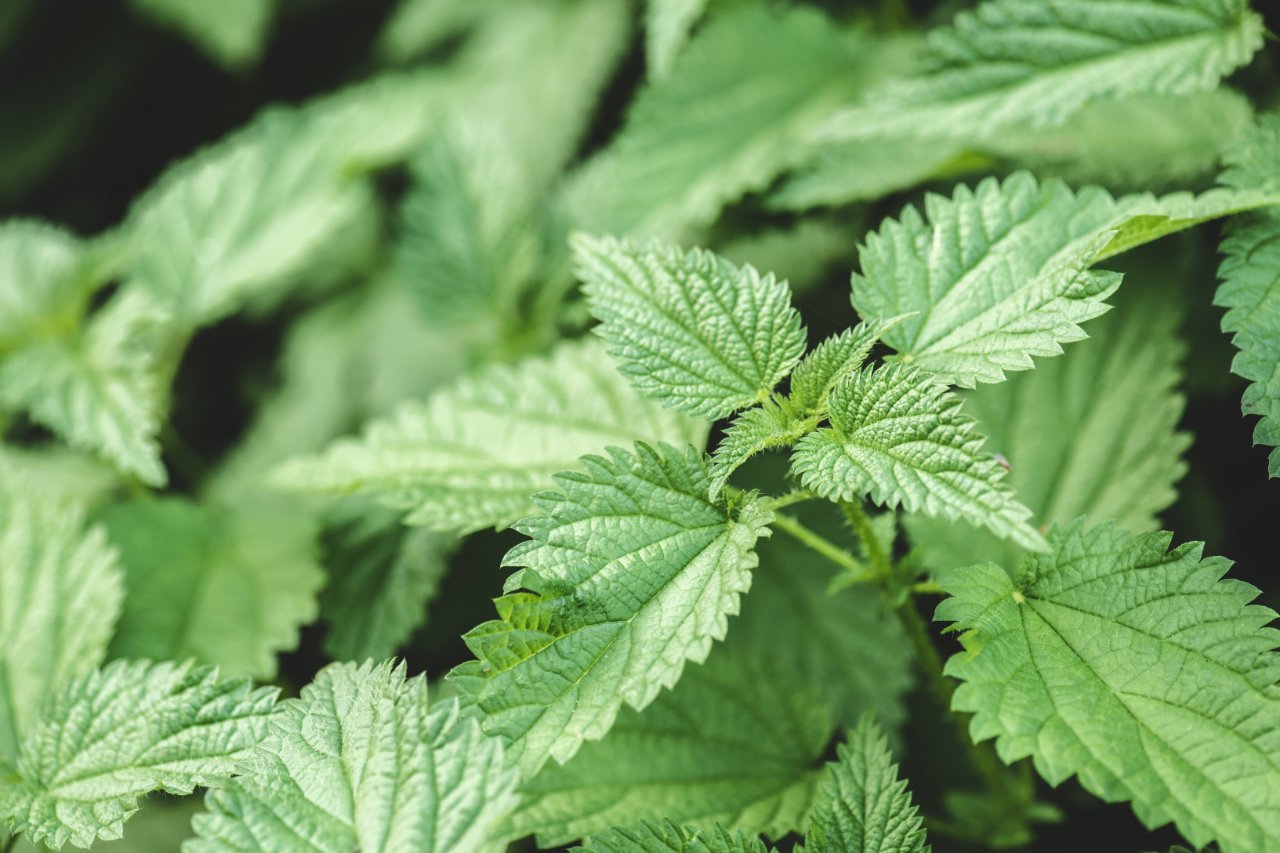 The common Stinging Nettle (Urtica dioica), a familiar sight in the British countryside, is not just a plague to children in shorts, it has in fact long been touted as a remedy for Hayfever and other maladies!  It may work because Nettle leaf contains a range of flavonoids which may have antihistamine effects. In a preliminary clinical trial (5) it was shown to successfully reduce sneezing and itchy eyes in some people with Hayfever. If you don’t fancy making Nettle soup or adding them to salads, try drinking several cups of a strong Nettle tea throughout the day. If you don’t fancy the tea, an easy option is to use a Nettle tincture such as Nature’s Answer Nettle Extract – which made using a vegetable glycerine solution instead of the alcohol used in most herbal tinctures.


The health of your microbiome (the name given to the billions of ‘good’ probiotic bacteria and others in your gut) has been found to have a profound impact on the development and severity or many allergic reactions. An 8 week study published in The American Journal of Clinical Nutrition indicated that simply by taking a combination of Lactobacillus and Bifidobacteria in 2 capsules per day providing 3 billion units of probiotic bacteria may reduce symptoms in Seasonal Allergic Rhinitis sufferers. At the end of 8 weeks those taking the probiotics had improved (less symptoms) by 68%, compared to the placebo group who reported 19% improvement. So, those on probiotics had improved by 49% compared to placebo (8). It may therefore be well worth taking a probiotic throughout the months when you are affected.

If irritated eyes are one of your Hayfever symptoms, A. Vogel Extra Moisturising Eye Drops contain the herb Eyebright which has historically been used to ease tired or irritated eyes. Eyebright contains tannins which are believed to exert an anti-inflammatory effect reducing soreness. These easy to administer drops also contain Hyaluronic acid – a compound that naturally occurs in the body and is primarily found in the joints, skin and eyes. It has been called ‘nature’s moisturiser’ as it hydrates the skin and hair as well as filling the eyes. As well as keeping them hydrated which minimises irritation, it also acts as a natural barrier that may reduce the pollen that gets in your eyes. A.Vogel Extra Moisturising Eye Drops contain double the amount of hyaluronic acid compared to A.Vogel traditional Eye Drops which makes its protective benefits last longer. Worth having in your bag for Hayfever season, they are suitable for contact lens users and those with sensitive eyes.

One tactic for keeping pollen out of your nose and therefore reducing symptoms is to put some sort of barrier there to trap the pollen. If you don’t like the idea of using petroleum based products – HayMax Barrier Balm is a great natural solution to the problem. This simple organic balm is made from sunflower seed oil, beeswax and vitamin E. It must be applied regularly around the nostrils and always after you blow your nose, but it is safe for use by toddlers and children and one little pot lasts ages. It’s available in the original formula or with added Aloe Vera or Lavender. If carefully applied, it can be used around the rims of the eyes too.