Clive started Clive’s pies in the 1970s. According to legend, a moment of spiritual enlightenment transformed this ordinary Devonshire man into an ‘animal loving plant pie-oneer!’ 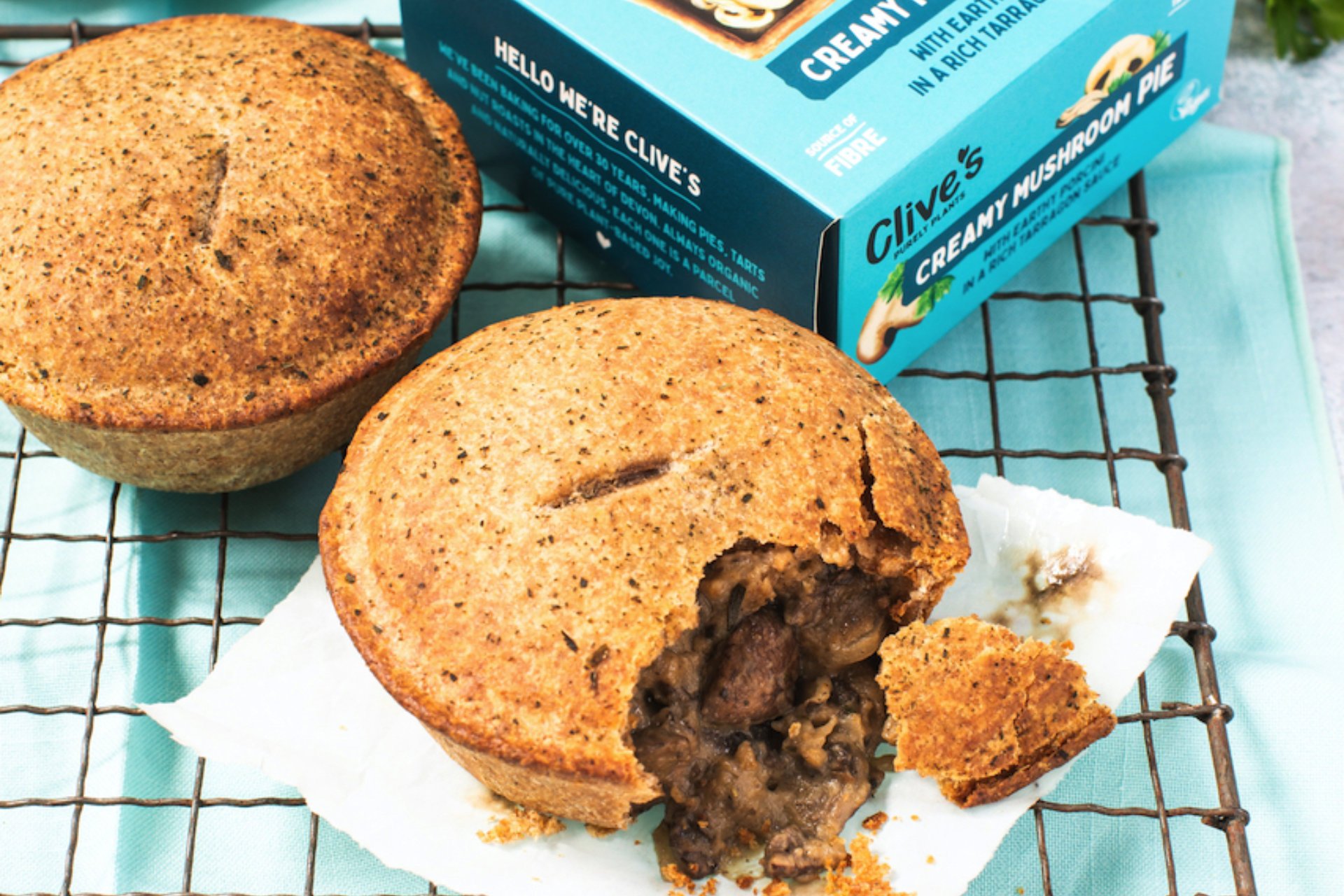 We have sold Clive’s Pies in Greenlife for more than 25 years, and in that time both businesses have enjoyed great success and have evolved and grown considerably. In fact, our deliveries from this fabulous local brand to our old shop further down the high street used to be made by the founder, Clive himself. Sally Carson, one of the current owners told us ‘We’re delighted with the long-standing relationship we’ve enjoyed with Greenlife over the years. We have delivered our pies to Greenlife from the days when Clive used to deliver them himself on his bicycle, up until now. They are always happy to try new products and we truly value their loyalty towards us.’

A pie chart of success

Clive started Clive’s pies in the 1970s. According to legend, a moment of spiritual enlightenment transformed this ordinary Devonshire man into an ‘animal loving plant pie-oneer!’ Focusing purely on the power of plants, the current owners – husband and wife team Sally and Chris Carson, have evolved and expanded Clive’s original vision into an extensive range of tasty pies, tarts and roasts that are 100% vegan and organic (and all of which are available in Greenlife!). All their pies are now dairy free and are made using either gluten free or wholemeal pastry. Favourites from their extensive range of wholemeal pies include Creamy Mushroom, Saag Aloo, Arabian Chickpea and Chestnut & Bean, and popular gluten free options are Olive & Lentil, Mexican Chilli and Mushroom & Leek. You can also find Bombay Curry, Lentil & Kale and Tomato & Olive tarts in our chillers, plus the scrumptious new vegan quiches Creamy Cauliflower and Vegan Quiche Lorraine, with more on the way! They are all made in small batches at their bakery just down river in Dartmouth. This small batch production ensures the right care and attention is put into each pie, along with a wonderful selection of organic ingredients that wherever possible, are sourced locally. From small beginnings they have now grown into a highly successful business with national distribution. 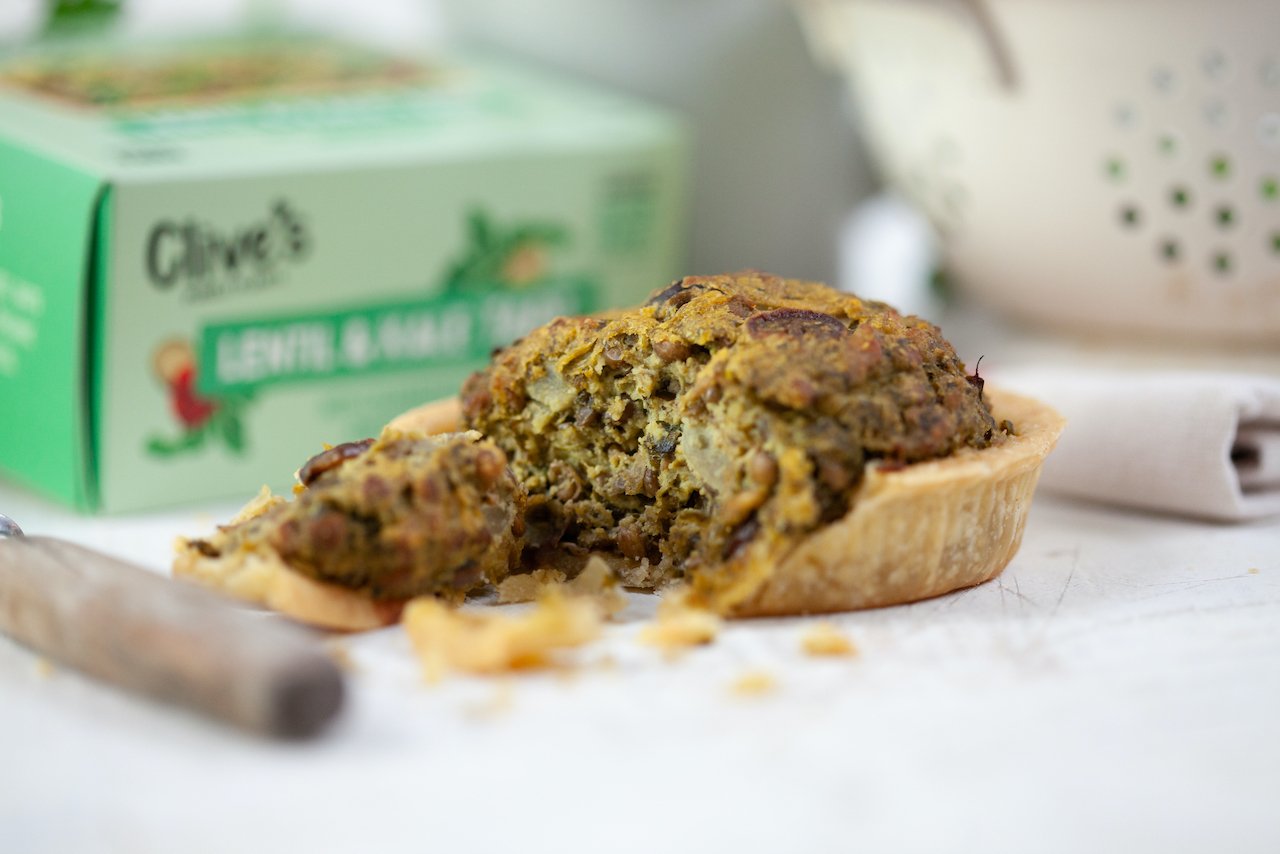 Clive’s Pies commitment to sourcing local and organic ingredients is just one way in which, although they have grown as a company, they have continued to make decisions based on an ethical and sustainable ethos. They look for organic suppliers with a good track record of sustainable farming, and although they use palm oil in their products, they have researched the market to find the most ethical supplier they could. Most of us know that to make pastry you need fat. All of Clive’s amazing pastry is vegan. This commitment to vegan ingredients is itself a good thing when it comes to sustainability, as we all know the higher environmental cost of animal farming versus plant cultivation. To bind the dough in their pastry they looked at the option of using avocado or coconut oil instead of palm oil, but palm oil production was found to be more efficient, as it puts less strain on land and resources – as long as you are using a sustainably managed supplier. Clive’s supplier of palm oil is the Daabon Group in Colombia – globally recognised as one of the most sustainable and ethical producers of organic palm oil around. It is certified to the highest standard by the RSPO (The Roundtable on Sustainable Palm Oil). This means it is fully traceable and is grown on assigned land that will not cause any further deforestation.

Because we know this issue is very important to many of our customers at Greenlife, it deserves close scrutiny. Happily, like all ethical business should be – they are entirely transparent about their choices. You can read more about them on their website:
https://www.clivespies.com/news/clives-use-of-palm-oil/

All Clive’s products proudly display the vegan trademark as they are free from animal-derived ingredients, show absolutely no cross-contamination during production, and are GMO-free. They are beautifully packaged in 100% recyclable packaging, which is 100% plastic free. As a company they strive to keep their environmental impact low, not only by the local sourcing of ingredients, but also by recycling tins, cardboard, plastic, film and vegetable peelings at their premises in Dartmouth.

Clive’s Pies are a wonderful Devon business success story, and we think that the fact that they are available up and down the country in big supermarkets like Waitrose and from ethical online retailers like The Vegan Kind as well as from us is a good thing. After all, when they are ethically made and taste as good as this – surely everyone deserves a slice (or two) of the pie?