Tideford Organics have been making delicious organic soups, meal pots and cooks’ ingredients here in Devon for nearly 25 years. Their moto is ‘If it’s not organic, it’s not in the pot’ and all their ingredients are not only organic wherever possible, but also vegan and gluten free… 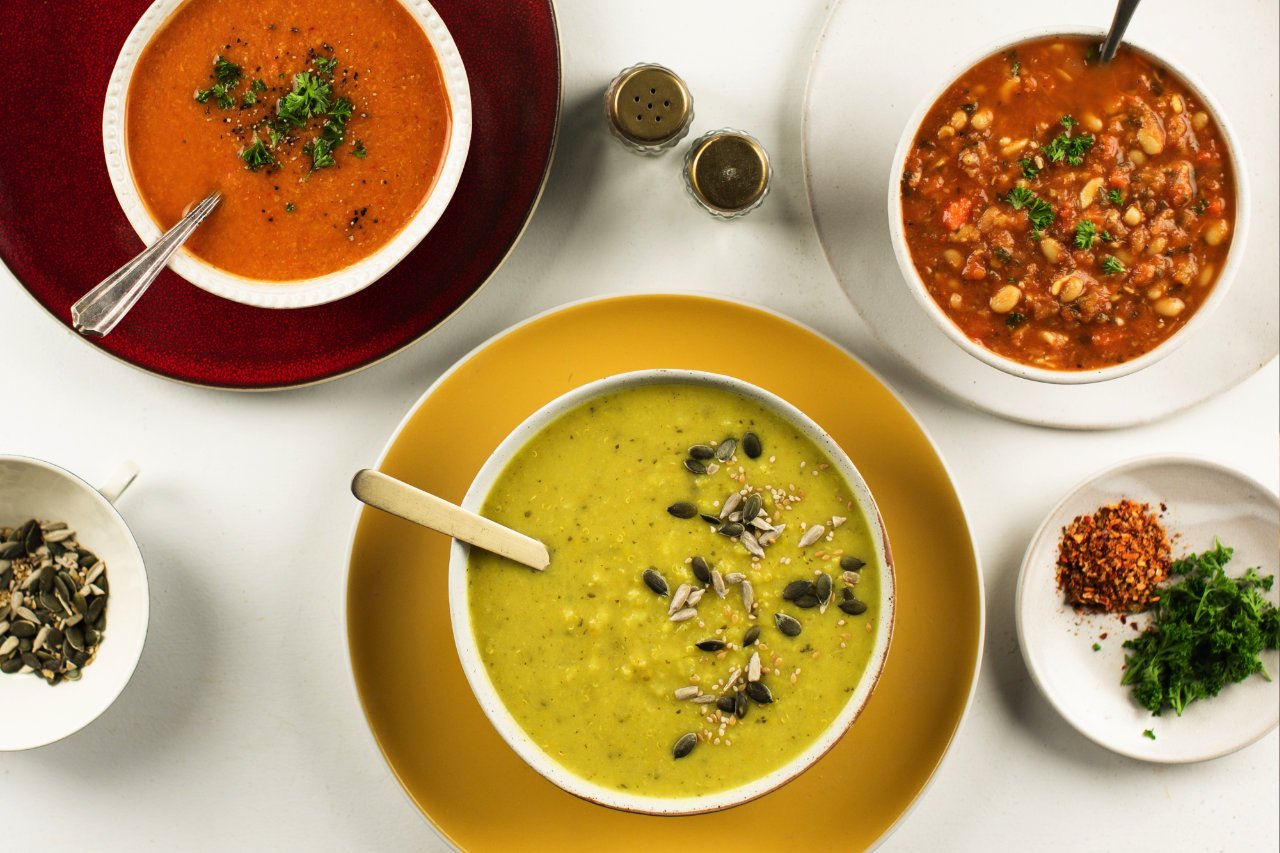 Tideford Organics have been making organic soups, meal pots and cooks’ ingredients here in the heart of Devon for nearly 25 years. At Greenlife we carry a revolving selection of their delicious organic vegan soups in our chillers that changes with the seasons. Customer favourites include their Italian Tomato Soup with is made with red peppers and lentils, their hearty Country Vegetable Farmhouse Soup (choc full of veggies plus haricot beans and a touch of parsley, garlic and black pepper) and their heavenly Pea, Coconut & Turmeric Soup, but there are plenty more to choose from to tingle your tastebuds…Moroccan Spiced Chickpea Soup, Thai Spinach Soup and Smoky Tomato Soup are just some of the funky flavour combinations that are conjured from their kitchens. Packed full of healthy organic ingredients with a high nutrient value and plenty of protein it is not surprising that they have made soups for hospitals, hotels, airlines and cafés as well as for sale in the retail sector.

We also stock a range of their fresh unpasteurised miso pastes that should be a fridge staple for any budding vegan chef. Made in the Nagano region at the base of the Central Alps in Japan, an area known for producing some of the highest quality misos in the world, they are handy to spruce up any pot of veggies or add flavour to a stir fry or salad, or they can be used to kick start a recipe idea. Tideford Organics use their own trusty misos to put an added depth of flavour into some of their own soup recipes – such as their scrumptious take on the classic French Onion Soup. As well as selling these versatile miso’s – Tideford also offer dozens of great vegan recipes on their website www.tidefordorganics.com – well worth a look for inspiration in the kitchen! Look out for their Fresh Brown, White and Red Miso pastes in our chillers at the back of the store.

If it’s not organic, it’s not in the pot

Tideford Organics was founded back in the summer of 1996, when the Spice Girls were better known than Turmeric spice and organic and vegan foods were not really in the public consciousness as they are today. The first product out of the gates was their organic fresh basil pesto, but this was soon followed by a range of organic fresh soups that were initially presented in kilner jars. From the outset, Diana, the founder of Tideford Organics knew that it was important to register the company with the Soil Association, and to this day all their products carry the Soil Association seal of approval. Organic has been at the centre of their ethos since the beginning, their moto is ‘If it’s not organic, it’s not in the pot’ and all their ingredients are organic wherever possible. Everything is also vegan, gluten free, nut free, and made with no added sugar. 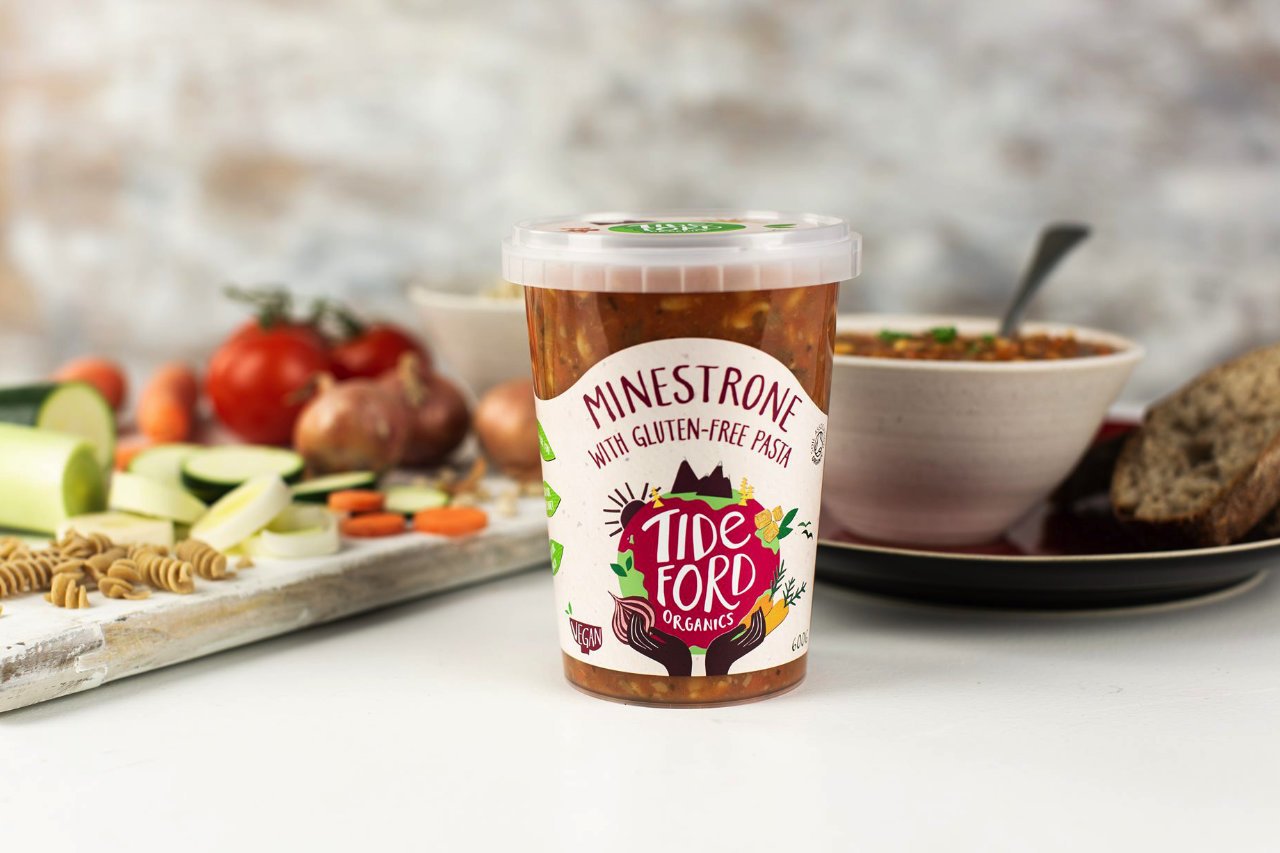 The turning of the tide


Although there were many local shops and suppliers that were vital to the initial growth of the company, it was a chance meeting in 1998 that saw them gain a listing in Waitrose, which was pivotal in enabling them to expand the business and marked the real turning of the tide for Tideford Organics. The additional increase in sales volume that they enjoyed allowed them to move into the Totnes factory where they are still based today. The small international team had their numbers bolstered by part time employees frequently recruited from the student population at Dartington College of Arts (until it relocated to Falmouth in 2010) and their unit on the industrial estate soon became famous as the place where all the nice smells emanated from! The business flourished as organic food became more mainstream – and the crew in the Tideford kitchens continued to experiment and innovate with exotic taste combinations, adding superfoods, fresh herbs and a broad selection of organic ingredients into their pots.

Tideford Organics have also embraced the revolution in plant based produce, and everything they make is now vegan, as well as being GM free, organic, gluten free and nut free. The decision to go ‘full vegan’ and gluten free means that everyone can enjoy Tideford products. They told us ‘It has been an easy message to promote as more and more people want to enjoy a plant based diet.’ They are now passionate supporters of a meat free future, and their website and Facebook page are full of staggering facts as well as stunning recipes, so we’ll leave you with one…’If everyone had one meat-free day a week it’d be like taking 240 million cars off the road.’ Food for thought.